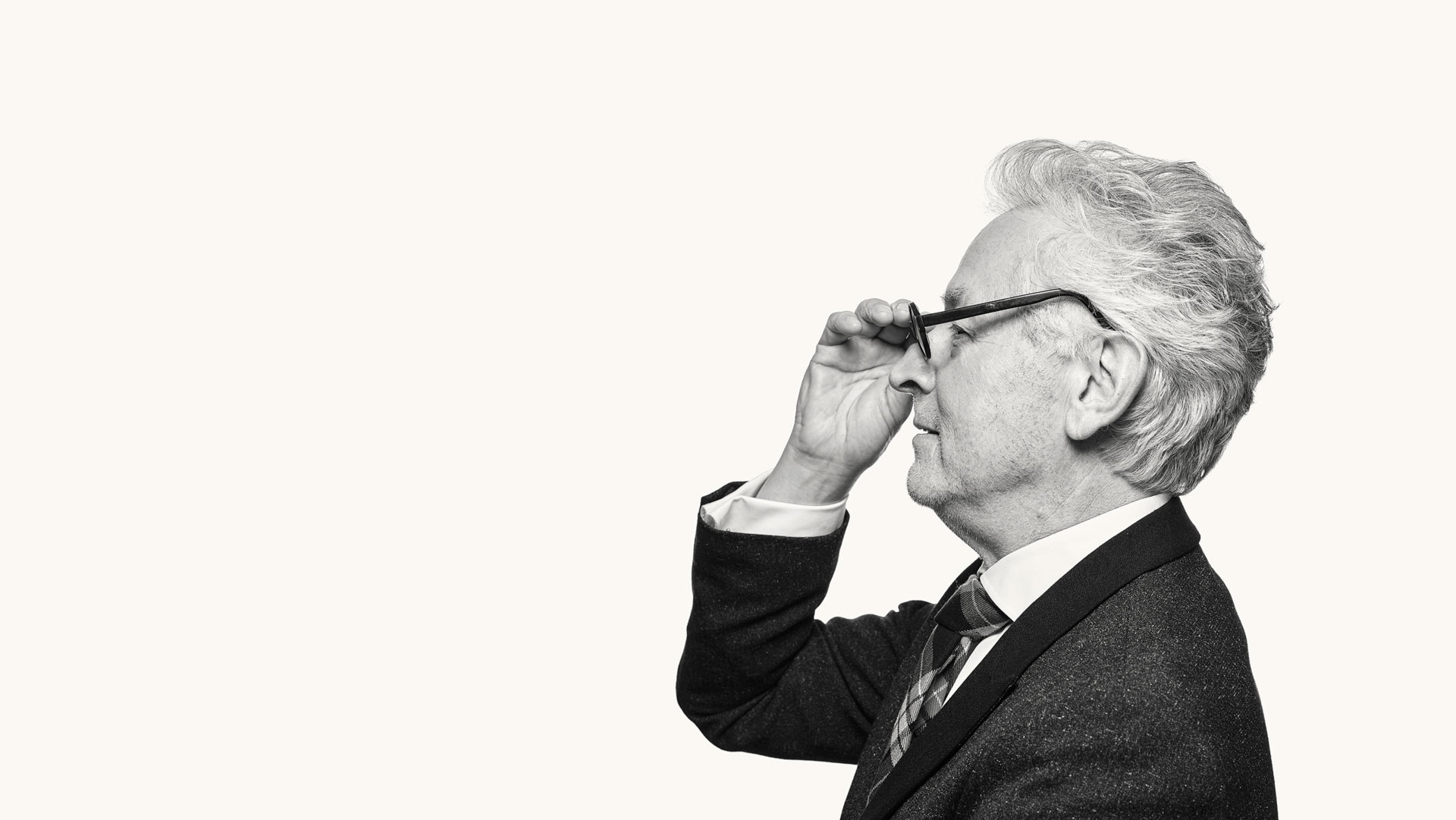 Thanks to the HST method, Igli is assured of beautiful, natural hair for the rest of his life. 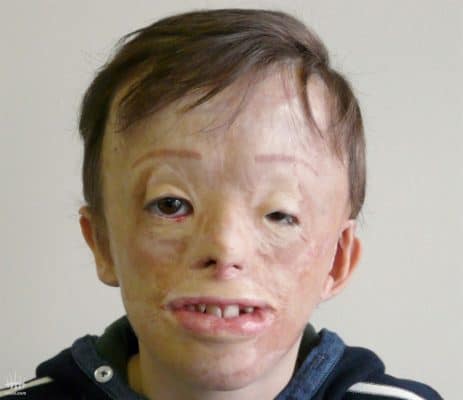 Scarring:
Burn wounds on front and sides of face and top of head.

HST/carried out:
Four restoration treatments on the front and top of head and the left sideburn by Dr K. van Herwijnen, a doctor at Hair Science Institute’s clinic in Maastricht, Netherlands

HST/planned:
Eyebrows, after all reconstructive operations on the face have been concluded

At the age of six months, Igli suffered serious burn injuries. Second and third degree burns on body and head meant that several rounds of reconstructive surgery were needed for more than seven years. His doctor, Dr Cynthia Lafaire, plastic surgeon and head of the burns unit at ZNA Stuivenberg hospital in Antwerp, Belgium, visited Hair Science Institute to see whether it was the right place for Igli to get his new hair.

During the initial discussion with Igli, it became clear that the surface area to be treated was so large that it would take several treatments. Igli’s donor area (the back of his head) was in good condition despite a number of scars, so there was no obstacle to the plan to carry out multiple treatments. Because Igli was traumatized by what he had to go through at a young age, a highly cautious approach and painless procedure was the only way to ensure the treatment would be successful.
His father, Dr Lafaire, and a staff member of Stuivenberg hospital accompanied him during the treatments to offer psychological support. 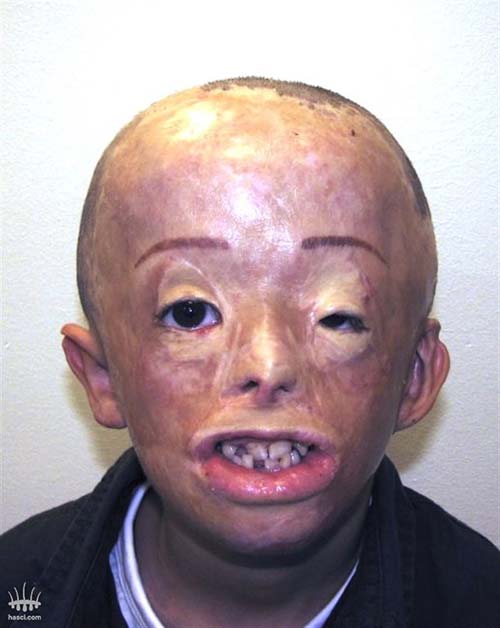 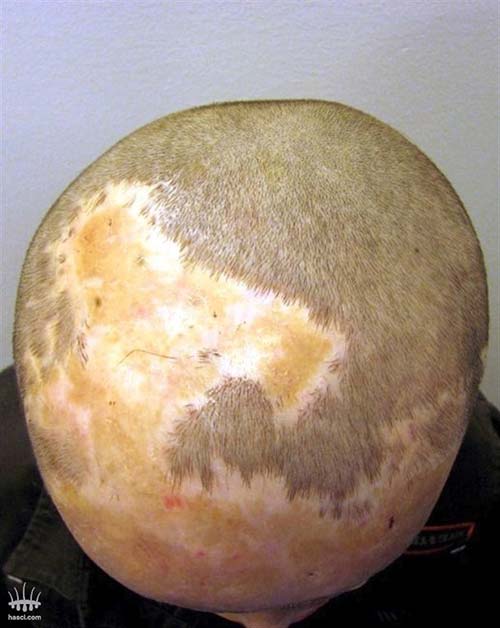 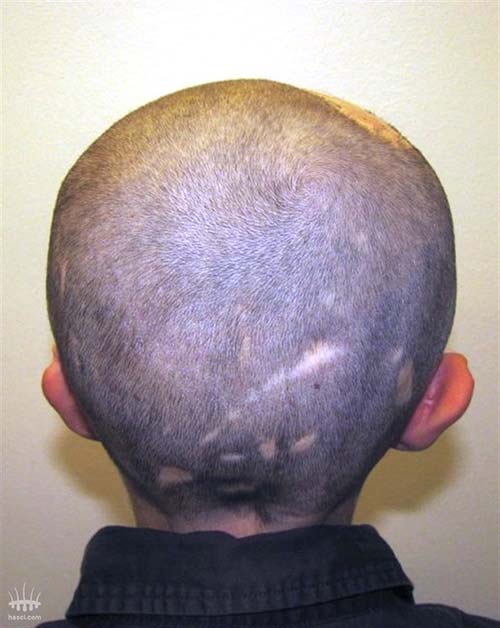 Treatment date: 12-08-2008.
During the first treatment session, the hairline on Igli’s forehead was reconstructed. This was done to ensure better initial results than if the top of his head were treated first.

Treatment date: 11-12-2008
Thanks to Igli’s enthusiasm following the first treatment, he could hardly wait to get even more hair. We were able to schedule a second appointment soon after the first, as we had not needed to use the entire donor area during the first treatment. This second treatment widened the hairline on the front and top of his head.

Treatment date: 22-04-2010
This third treatment created as full a head of hair as possible It resulted in sufficient hair growth on the scar at the front. Combined with the hair that he still had on his head this resulted in a full head of hair, and Igli was able to say goodbye to the cap he always had to wear.

Treatment date: 29-03-2011
During the final check-up, Igli remarked that he would very much like to have a sideburn on the left of his face and asked if he could perhaps have a few more hairs there. The fourth treatment was planned straight away.

Treatment date: 06-05-2013
Igli arrives for his fifth treatment at the clinic in Maastricht. Just like the previous treatments, this was also carried out by Dr Kristel van Herwijnen.

The treatment results can quite simply be described as outstanding, despite the fact that the receptor area was so badly scarred. The donor area has recovered completely, so any further cosmetic treatments at a later date will not be a problem. Igli is now assured of a beautiful, natural head of hair for the rest of his life. He is clearly very happy with it.